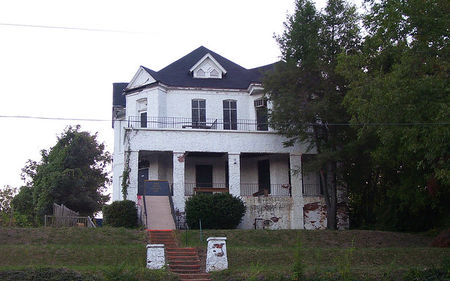 The Jaycees Haunted House in October 2006. Photograph by André Natta.

The Birmingham Jaycees Haunted House was an annual haunted attraction staged by volunteers from the Birmingham Junior Chamber of Commerce as a fundraiser to support their charitable activities. The primary use of funds raised at the house was to sponsor a Christmas shopping tour for needy children.

The attraction eventually found a long-term home at 732 29th Street South in Lakeview. It remained there until closing in 2004. That year's attraction was billed as "The Final Nightmare", and the property was sold to a holding company affiliated with St Vincent's Hospital, but no specific plans were carried out.

In 2006, St Vincent's agreed to lease the house back to the Jaycees to re-open the haunted house. Preparations were well underway for an early October opening, but inspections by the Birmingham Fire & Rescue Service and Birmingham Department of Planning, Engineering and Permits uncovered numerous infractions of current codes which forced a cancellation. The house was demolished in 2010. St Vincent's landscaped the site, but announced no plans for redevelopment.