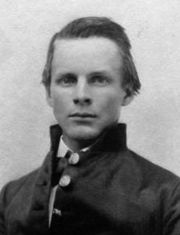 John R. Pelham (born September 7, 1838 near Alexandria, Calhoun County; died March 17, 1863 at Kelly's Ford, Virginia) was an artillery officer who served with the Confederate cavalry under J.E.B. Stuart during the Civil War. Dubbed "The Gallant Pelham" for his military prowess and personal courage, Pelham revolutionized the usage of light artillery as a mobile arm of the cavalry. The city of Pelham in Shelby County is named for him.

Pelham was the third child, with five brothers and a sister, Betty, born to Dr Atkinson and Martha Pelham at his grandparent's home along Cane Creek near Alexandria in Calhoun County. He grew up on the family's 1,000 acre plantation, and learned to raise horses at a young age. On one instance, he rode a neighbor's milk cow until it ran dry, prompting a lecture to only ride bulls in the future, if he were feeling adventurous.

In 1856, local Congressman Sampson Willis Harris secured an appointment for Pelham to the United States Military Academy, at the request of A. J. Walker.

Already in 1860, rumblings of the Southern secession were affecting Pelham, his concerns that he would not be able to graduate were expressed in letters he wrote home.

In 1861, with graduation approaching and war breaking out, Pelham wrote to the new leader of the Confederacy, Jefferson Davis, inquiring as to whether he should leave West Point. Ultimately, Pelham resigned from West Point, just a few weeks before his planned graduation, in order to accept a commission in the militia of his home state of Alabama. He soon went to Virginia, where he joined the army of Joseph E. Johnston as a lieutenant in the artillery. Pelham's well-drilled and disciplined battery caught the eye of J.E.B. Stuart, who provided horses for the men and transformed the battery into "horse artillery", more mobile than conventional artillery.

Pelham was involved in every major military engagement of Stuart's cavalry from the First Battle of Bull Run to Kelly's Ford, more than 60 encounters. He particularly distinguished himself as the Chief of Stuart's Artillery in the Battle of Antietam (Sharpsburg) and the Battle of Fredericksburg. At Sharpsburg, Pelham's guns, positioned on a rise known as Nicodemus Hill, repeatedly harassed the flanks of oncoming Union lines, causing numerous casualties and breaking up battle formations. Lieutenant General Stonewall Jackson said of him in his report on the battle, "It is really extraordinary to find such nerve and genius in a mere boy. With a Pelham on each flank I believe I could whip the world."

At Fredericksburg, Pelham's guns, positioned well in advance of the main Confederate lines, held up the entire flank of the Union Army of the Potomac for several hours, enabling the Confederates to repel a series of strong attacks. General Robert E. Lee commended Pelham in his official report for "unflinching courage" while under direct fire from multiple Union batteries. Pelham was, at the time, commanding only two guns that were in service, but with those batteries for a time enfiladed the entire advancing Federal lines of battle.

At Kelly's Ford on March 17, 1863, Pelham participated in a cavalry charge, his artillery not being engaged. Standing up in his stirrups, he urged his men to "Press forward, press forward to glory and victory!" Not long afterwards, he was struck in the head by a fragment of an exploding Federal artillery shell. He was carried six miles away from the battlefield to Culpeper Courthouse, and died the following morning without having regained consciousness.

Major John Esten Cooke, a fellow officer and tentmate of Pelham's, wrote: "He is the bravest human being I ever saw in my life."

The Confederate Senate approved Lee's recommendation that Pelham receive a posthumous promotion to lieutenant colonel. Pelham's body was returned home and buried in Jacksonville, where a statue erected downtown in 1905 commemorates the fallen officer. Stuart named his third child Virginia Pelham, born in 1863, in honor of the cannoneer he had admired.

In 1894, poet James R. Randall wrote the poem John Pelham. In 1901, a portrait of Pelham was hung with other Confederate officers in Alexandria, Virginia, and General Joseph Wheeler gave the speech on the ascension of his portrait, referring to him as the "Gallant Pelham". In 1907, one of his spurs was among the artifacts melted down to create the Pokahuntas Bell for the Jamestown Exposition.

The John Pelham Historical Association seeks to maintain his memory and preserve his archive of papers and memorabilia. In 1955, he was named to the Alabama Hall of Fame. The cities of Pelham, Alabama, and Pelham, Georgia, are named in his honor. Bessemer Tech was originally named the John R. Pelham Technical-Trade School for him in 1966, but the name was changed months later by legislative action. In 2004, the state of Georgia designated the section of State Highway 300 that passes through Pelham as the John Pelham Memorial Parkway.

The United States Field Artillery has honored Pelham with artillery camps named for him, such as the former Camp Pelham which housed artillery battalions of first the 1st Cavalry Division and then later the 2nd Infantry Division in Korea.