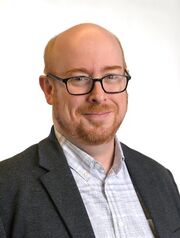 Kyle Edward Whitmire (born January 13, 1977 in Thomasville, Clarke County) is the state political commentator for the Alabama Media Group. He was previously a local political reporter for The Birmingham News, a columnist and new media editor for WELD for Birmingham, and political editor and author of the weekly "War on Dumb" column for the Birmingham Weekly.

Whitmire graduated from Thomasville High School. He graduated from Birmingham-Southern College in 2001 with a degree in English and a minor Political Science. He edited the campus newspaper, Hilltop News, and one of his reporters, Glenny Brock, later recruited him to the Weekly.

Whitmire's "War on Dumb" column (originally called "Spin Cycle") was awarded first place for best political column in 2008 and 2009 in the 55,000-and-under circulation division by the Association of Alternative Newsweeklies and the Medill School of Journalism. The column finished in third place in 2004 and 2005.

Whitmire was hired away from WELD by the Alabama Media Group, content provider for the Birmingham News, shortly after a major shake-up at the newspaper. He covers politics for al.com and resumed publishing his "War on Dumb" column in 2014. He also appears weekly on WAPI-FM and WBHM-FM to discuss local and state politics.

Whitmire received the 2019 Scripps Howard Award for his opinion columns covering, "Life, Politics and Corruption in Alabama." In 2021 he was given the first "Molly" prize for political commentary, awarded by the Texas Observer in honor of legendary columnist Molly Ivins.