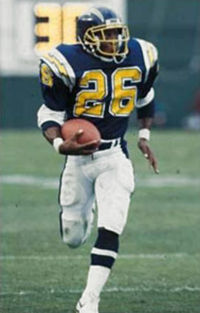 Lionel "Little Train" James (born May 25, 1962 in Albany, Georgia), is a former professional football player who was selected by the San Diego Chargers in the 5th round of the 1984 NFL Draft. Undersized at 5'6" and 171 lbs., James played running back at Auburn University and spent his entire 5 year NFL career with the Chargers from 1984-1988. His best year as a pro came during the 1985 season when he led the AFC with 86 receptions.

In the 1985 season James set the NFL record for all purpose yards (combined yards rushing, receiving, and returning kicks) in the history of the NFL with 2,535 yards. That same season he also set the record for receiving yards by a running back with 1,027 yards. On November 10 of that same year he had his best day as a pro versus the Los Angeles Raiders, gaining 345 all purpose yards including a career best 168 yards receiving and scored the winning touchdown in overtime.

In 2006, James was inducted into the Alabama Sports Hall of Fame.