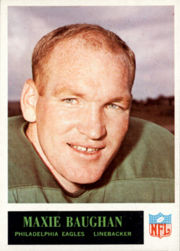 Maxie Callaway Baughan, Jr (born August 3, 1938 in Forkland, Greene County) was a linebacker for the Georgia Tech Yellow Jackets and in the National Football League.

Baughan starred at linebacker and center for Georgia Tech and was named an All-American and the Southeastern Conference Lineman of the Year during his senior season. He was the Most Valuable Player for the 1960 Gator Bowl, finishing the year with a single-season team record of 124 tackles.

Baughan was selected by the Philadelphia Eagles in the second round (20th overall) in the 1960 NFL Draft. He started at right side linebacker as a rookie and helped the team secure their only NFL championship that year. He was named an All-Pro four times and went to nine Pro Bowls. In 1966 Baughan was traded to George Allen's Los Angeles Rams. He was named the team's defensive captain and maintained his effectiveness until he was slowed by injuries in 1970. He retired after that season.

In 1972 Baughan worked as defensive coordinator for Georgia Tech. In 1974, Allen convinced him to rejoin him with the Washington Redskins as a player/coach. He played one more year before retiring again from the NFL.

From 1975 to 1982 Baughan was defensive coordinator for the NFL's Baltimore Colts and Detroit Lions. He accepted the job of head coach for the Cornell Big Red, which claimed a share of the 1988 Ivy League championship. He later returned to the NFL as an assistant for the Minnesota Vikings, Tampa Bay Buccaneers and Baltimore Ravens before retiring in 1998.