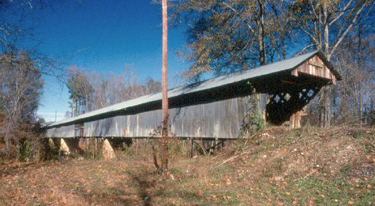 The Nectar Bridge was a 385-foot long covered bridge located on Nectar Road over the Locust Fork just southeast of the Nectar community in Blount County. It was built in 1932 using a Town lattice truss, a type of truss patented by Ithiel Town in 1820 which uses numerous small members pegged together into a lattice pattern to build up the spanning members. The bridge's two stone supports divided it into three spans.

The bridge was one of several constructed by Zelmer Tidwell and his uncle, Forrest Tidwell. When built, it was the second-longest covered bridge in the county, after the 432-foot Standridge Bridge near Hayden (destroyed in 1967). The bridge was a well-known community landmark, sometimes used for meetings and baptisms. It was also said to have been haunted by the ghost of a mail carrier who died on the bridge.

Maintained by the Blount County Commission and the Alabama Department of Transportation, the Nectar Bridge survived long enough to become the seventh-longest covered bridge in the United States. It was added to the National Register of Historic Places on August 20, 1981. It was burned by vandals on June 13, 1993.

A new concrete span was erected to the North of the covered bridge site. The masonry piers of the original bridge are visible from the new span.