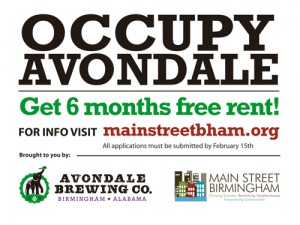 "Occupy Avondale" was a one-time contest held in 2012 to fill a vacant commercial space at 200 41st Street South in Avondale by offering six months free rent. The contest was sponsored by Avondale Brewing Company (whose co-founder, Coby Lake, owns the space), and by Main Street Birmingham. The name is a play on the "Occupy Wall Street" movement, represented locally by Occupy Birmingham.

More than 40 businesses submitted proposals. The winner of the contest, announced on March 29, 2012, was Freshfully, an on-line local food retailer, which plans to open a retail produce market in the space. Sponsors have indicated that they will work with other applicants if they are interested in finding other spaces in Avondale.