This article is about the 1937 building at 3rd Avenue North and 19th Street. For other buildings used by S. H. Kress & Company, see Kress Building. 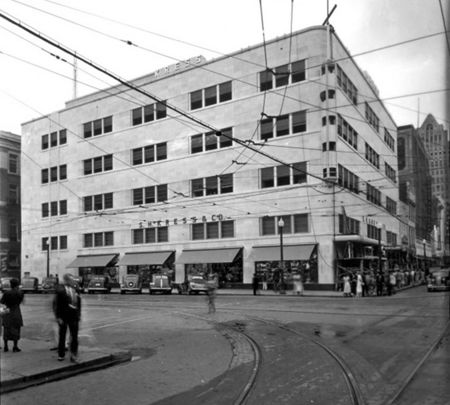 The steel-frame building was designed by company architect Edward F. Sibbert in a Bauhaus-inspired modern style that contrasted with his recently-completed Nashville store with its Greek revival motifs. The Birmingham store's horizontal scheme contrasted with the art deco-styled flagship store in New York. He specified a mottled cream-color terra-cotta facade trimmed with bronze. The display windows were wrapped with contrasting darker-colored marble panels and shaded with awnings housed in copper boxes. The wider display windows on 3rd Avenue were covered by projecting balconies with pipe railings. The upper walls, with groups of two-over-two windows, were nearly stripped of ornament, except for horizontal string courses, and large golden letters at the cornice and on the rounded corner, where the horizontal scheme is interrupted by a three-story vertical sign with a large flagpole on top. The overall effect evoked the design of ocean liners. The building was constructed for $750,000 by Day & Sachs of Birmingham.

The Kress store thrived in the center of Birmingham's downtown theater and retail district during it's mid-century heyday. In the 1960s the exterior was covered with new metal panels. The store closed in 1978 leaving the ground floor vacant and offices on the upper floors. The building was added to the National Register of Historic Places on January 4, 1982.

In 1983 Costa and Head planned to redevelop the building as part of their project for "The Atrium", which would also include several other structures on 2nd Avenue, and would return Blach's department store to its former corner in the Kress building. The project was reduced in scope and proceeded without Blach's involvement.

In 2003 the firm of Wiggins, Childs, Quinn & Pantazis acquired the building and remodeled it to relocate their offices from the SouthTrust Tower. The renovations were performed by Southpace Properties and designed by Cohen & Company with help from historic preservation consultant Linda Nelson. The project, which was completed in 2004, qualified for a Historic Preservation Tax Credit. The lower level was also remodeled into a cabaret theatre for the Red Mountain Theatre Company.