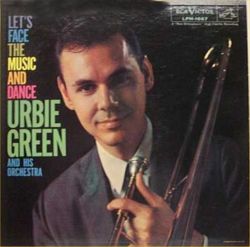 Urban Clifford "Urbie" Green (born August 8, 1926 in Mobile) is a jazz trombonist. He toured with name bands and artists such as Woody Herman, Gene Krupa, Jan Savitt, and Frankie Carle. Green has played on more than 250 recordings and has released more than two dozen albums as a soloist. He is highly respected by his fellow trombonists. Green's sound on the is noted for its rich, warm, mellow tone, even in the higher registers, where he is more fluent than most trombonists. His technique, considered flawless by many in the music industry, sets him apart from the average. Urbie has appeared in major jazz festivals, motion pictures, concert halls, nightclubs, radio, television and at the White House.

Green was a member of the Auburn Knights big band, based at Auburn University. He was inducted into the Alabama Jazz Hall of Fame in 1995.