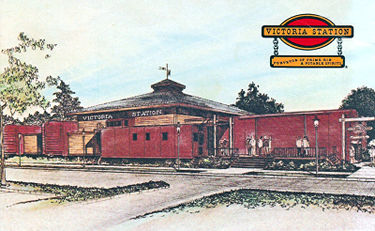 It was part of a national chain of British railroad-themed steakhouses specializing in prime rib which originated as a graduate school project at the Cornell University School of Hotel Administration. The first location opened in San Francisco in 1969. Birmingham's version, the first to adapt and reuse a historic building and the largest location for the chain, opened in 1975. Each restaurant used railroad cars as themed dining rooms and, like the others, Birmingham's Victoria Station incorporated a bright red "cocktail caboose" visible on the exterior.

The menu featured 11-, 22-, and 32-oz. prime rib entrees as well as barbecued beef ribs, steaks, a signature version of shrimp scampi and a self-service salad bar. Employees of the chain were granted stock options that soared as the enterprise peaked in the early 1980s. Singer Johnny Cash was employed as the chain's spokesman and his song "Destination Victoria Station" expressed his commercial feelings. After a sharp decline, the sole remaining Victoria Station is now operating in Salem, Massachusetts.

The building was later used for Larry's Place, The Station, and Club Zen. In 2012 it was purchased out of foreclosure as the new offices of Kinetic Communications.