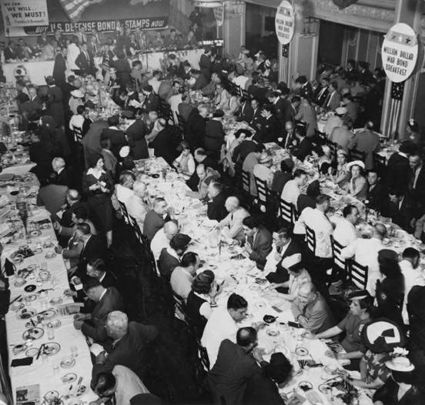 Guests at the War Bond Breakfast

The Million Dollar War Bond Breakfast or Victory Breakfast was a fund-raising event held on July 1, 1942 at the Tutwiler Hotel which served as a model for a national campaign to encourage the purchase of United States Treasury bonds for World War II.

Harold Blach, president of Blach's department store, is credited with originating the idea of hosting a breakfast event for individuals who would agree to purchase a certain amount of bonds. He and fellow Birmingham Chamber of Commerce member Jim Head organized the event with assistance from Jefferson County War Savings Bond chairman Lewis Jeffers. Each guest promised to buy at least $1,000 worth of bonds. More than 500 people who pledged that amount or more were issued invitations.

One of the featured speakers at the event was William Wendell Wechtel, co-chairman of the speakers bureau operating with the Treasury's retail advertising committee. He was also president of the Calvert Distilling Company of Baltimore, Maryland. That fact led to a protest from a "group of state temperance an church leaders". The event went forward with Wachtel despite the opposition, and was a great success. The breakfast more than doubled the million dollar goal. The astonishing amount raised was reported by telephone to Don McNeill's "The Breakfast Club" program, broadcast nationwide from Chicago on the NBC Blue Network.

Birmingham's remarkable success and Blach's dedication to the program led to similar events in Atlanta, Georgia; Chicago, Illinois; New Orleans, Louisiana and other cities. The U. S. Treasury Department appointed Blach to chair the "America Heroes Breakfast Club" which sponsored a large number of coordinated events on July 17. Five events took place in Birmingham that day.