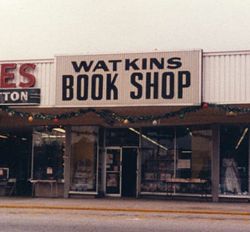 Watkins Book Shop was an independently-owned book store at 9168 Parkway East in the Roebuck Shopping Center in Roebuck.

The book store originally opened in 1972 as a Little Professor location owned by Paul and Diane Seitz. After a year, the Seitzes were considering closing it. After hearing this, one of their employees, Joyce Watkins, and her husband, Charlie, decided to buy it. The Watkins opted not to remain a Little Professor franchisee and renamed the store after purchasing it in 1973. They continued to run it until closing in 1994.