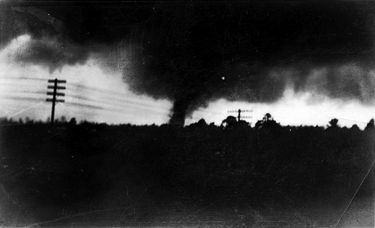 W. M. Russell's photo of the tornado in Shelby County 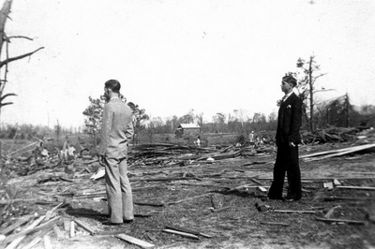 Photo of damage after the storm

The 1932 tornado outbreak, also known as the Deep South Outbreak, was a "super outbreak" of 10 tornadoes on March 21, 1932 that killed 268 in Alabama and more than 330 in all between Texas and South Carolina. In Alabama the storm destroyed 7,000 homes and businesses and injured 1,874 people.

The most destructive funnel tore a path across Perry, Bibb, Chilton, Shelby and Coosa Counties, killing 49. Columbiana was hardest hit, with 15 fatalities.

Another one blew through Tuscaloosa and Northport, killing 37 and destroying nearly 100 homes, including the Tuscaloosa Country Club. The old gymnasium at the University of Alabama was pressed into service as a temporary hospital after Druid City Hospital was overfilled. One report from Hale County related the following horror: "In an old tree stump, a horse collar, a dead pig and a 3 year old baby were found jammed together."

Additional fatalities were reported in Cullman, Clanton, Jemison, Thorsby and Sylacauga. Seven members of the Latham family of Plantersville in Dallas County were swept out of their house and killed. Four surviving children, aged 2 to 9, were adopted by Mr and Mrs W. E. Bruce of Selma.

The weather reports published in the local news indicated the arrival of a cool front with likely thunderstorms, but no warning was given concerning the potential for destructive tornadic activity. On Easter Sunday, March 27, as sightseers clogged the highway, another tornado hit Bibb and Chilton County, leaving 8 more dead and 50 injured.