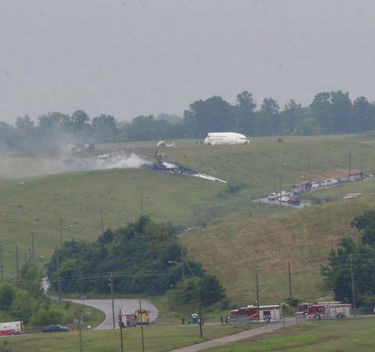 The 2013 Airport Highlands plane crash was a fatal aviation accident that occurred in a cleared area of the Airport Highlands neighborhood north of the Birmingham-Shuttlesworth International Airport on August 14, 2013.

The Airbus A300-600F twin-engine cargo plane was being operated by United Parcel Service as UPS Flight 1354. The cargo flight was on the last leg of a scheduled flight originating in Rockford, Illinois with stops in Peoria, Illinois and Louisville, Kentucky. Just before 5:00 AM, the craft began approaching Birmingham's 7,100-foot Runway 18 from the north.

The airport's main 12,000-foot Runway 6/24 was undergoing maintenance, with workers scheduled to complete work on its lights at about the time the craft was approaching. Tower controllers gave the UPS crew the option of landing on Runway 18, which they agreed to. The shorter runway's navigational systems provide lateral positioning information, but not altitude information. Conditions were overcast with some clouds at about 1,100 feet.

The pilots received a "sink rate" warning seconds before impact, but no minimum safe altitude alerts from airport radar were issued to air traffic controllers. The aircraft apparently clipped power lines and tree tops several thousand feet short of the runway, shearing trees about 20 feet above the roof of one resident. At least one of the two Pratt & Whitney engines sucked in wood from a tree and the aircraft crash landed about a half mile short of the end of the runway.

An air traffic controller witnessed a bright flash consistent with the breaking of a power line followed by the disappearance of the plane's landing lights and then the orange flash of a fuel explosion. Nearby residents saw the aircraft engulfed in flames before it hit the ground, causing several loud explosions. The forward crew cabin broke away from the main fuselage and came to rest about 50 yards away. Birmingham Fire and Rescue Service extinguished the fire before 7:00 AM. Captain Cerea Beal, Jr of Matthews, North Carolina and First Officer Shanda Carney Fannin of Lynchburg, Tennessee both died in the crash.

Several blocks around the crash site were barricaded by the Birmingham Police Department prior to the arrival of National Transportation Safety Board investigators. The still-smoldering debris field hampered efforts to locate flight data recorders until the second day of the investigation. The "black boxes" were taken to the NTSB's Washington D.C. laboratory for analysis. There was no indication of engine trouble prior to the plane's descent.

A transcript of the cockpit voice recorder included a conversation early in the flight between Beal and Fannin in which they agreed that they would prefer more time to rest between flights.

The National Transportation Safety Board's preliminary report cited pilot error and fatigue in concluding that, "...the accident was caused by the continuation of an approach that was not safe." The agency also noted a series of oversights which were not considered causes of the crash, but that could have helped to prevent it. Those included timely sequencing of the flight path for the autopilot system and installing available upgrades to the craft's ground warning system.

UPS expressed disagreement with the allegation that their policy on pilot fatigue played a part, noting that Beal had not flown in 10 days and Fannin had had 8 of the previous 10 days off. The company stated that pilots share in the carrier's responsibility to ensure that pilots are property rested.

Among the shipments initially thought to be lost in the crash were 13,000 bags sewn by women in Calcutta, India for sale through the non-profit Freeset USA. The organization immediately began planning to sell a t-shirt to raise money for the families of the flight's crew members. The bags were later recovered from the wreckage.

Thirty-two championship rings for Morgan County's Falkville High School Blue Devils track team and a $27,000 diamond bracelet being shipped to Rebecca's Fine Jewelry in Bessemer were also on board.