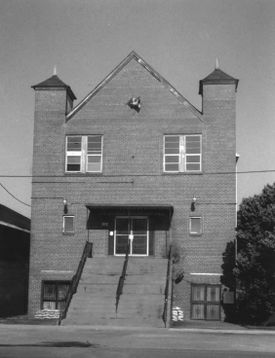 6th Street Peace Baptist Church is a Baptist church organized about 1920 as St Timothy Baptist Church. The congregation of about 500 meets at 300 6th Street North at 3rd Avenue North just west of I-65 near Smithfield. The pastor is Geroid Caldwell.

St Timothy Baptist met in private homes for its first two decades. Pastor John Henry Stenson, who came to the pulpit in July 1940, suggested renaming the church "Peace Baptist", and led the congregation in purchasing its first building, a small white-painted wood frame church which was erected on a vacant lot on 5th Street North in the early 1940s.

On June 6, 1948, the congregation moved into a new building designed by Stenson and built by Deacon Jin Wright adjacent to the current church. The new building was a brick Gothic Revival structure with a gable front and two short towers with pyramidal roofs. The church was used for some Alabama Christian Movement for Human Rights mass meetings during the Civil Rights Movement.

Pastor Stenson died in early 1969. Hobdy Moorer Jr was called to take his place in August of the same year. The church's activities increased during his tenure, with better record-keeping, services to the homeless and senior citizens, a choral ensemble, youth programs, and improvements to the building's interior finishes and equipment. A new brick-veneer vaulted sanctuary was completed in 1970, after which the 1948 church building was remodeled as the "J. H. Stenson Fellowship Hall".

Moorer retired in December 2002 and Geroid Caldwell was called as pastor in November 2003. Caldwell began producing an afternoon radio broadcast and expanded programs for all members, including children and teenagers. He also oversaw the expansion of the choir program with a men's chorus and instrumental group.

The 1948 building, which had been added to the National Register of Historic Places in 2005 for its association with the Civil Rights Movement, was demolished for a future fellowship hall and family life center.