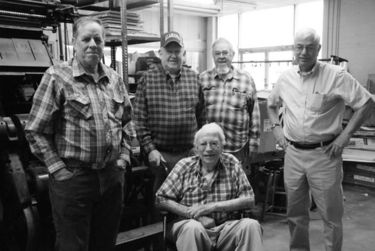 Bill Cather with former employees at Cather Publishing in 2014

The A. H. Cather Publishing Company was a commercial printing company located at 3109 7th Avenue South in Birmingham's Lakeview district. It was founded in 1913 by Alonzo Heath Cather, son of pioneer Pell City publisher George Cather. A. H. and his brother, Belton jointly inherited their father's newspaper and printing business, with A. H. bringing the commercial print shop to Birmingham.

The business, which employed members of the Graphic Communications International Union Local 197-M, was passed down to Cather's son, Bill Cather and grandson, Bill Jr. He made the move to Lakeview to be closer to his home in Forest Park. He also took the initiative to bid for federal government print jobs, including military manuals, awards, stationery, and even White House press passes.

The business has supported the preservation of Rickwood Field, and a vintage-styled advertisement for the firm can be seen on the outfield wall. Cather retired and closed the shop in March 2014. One of Cather Publishing's historic presses was sold to a Montgomery print shop and another, which had been the Birmingham News' first Linotype press, was donated to the Birmingham History Center.