From Bhamwiki
(Redirected from ABC Coke)
Jump to: navigation, search 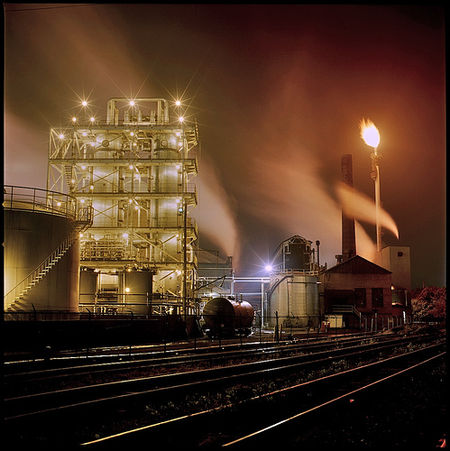 The company was founded in 1920 as the North Birmingham By Products Coke Oven Plant by the Sloss-Sheffield Steel & Iron Company. The facility provided coal gas to loft the balloons participating in the 1920 International Balloon Race, which launched from the grounds near the plant.

In 1925 ABC acquired the extensive mining assets of the Pratt Consolidated Coal Company.

Since 1985, it has been a division of the Drummond Company. ABC supplies all of the foundry coke for GMC's engine blocks and won that company's "Worldwide Supplier of the Year" award in 1993.

Until recently the plant burned coal to produce steam and incinerated excess gas in a large flare, visible for miles around. A project to harvest this combustion energy to power the plant produced significant energy cost savings.

In 2011 the Jefferson County Board of Health and U.S. Environmental Protection Agency found Drummond to have endangered health and violated the Clean Air Act by allowing benzene into the atmosphere from an open-ended overflow pipe. Drummond settled the enforcement action by agreeing in February 2019 to pay a $775,000 penalty and to improve its inspection process. That agreement was revised in January 2021 to improve the effectiveness and transparency of the monitoring process.

A 37-year-old worker died after being struck by a rail car at the plant in April 2021.