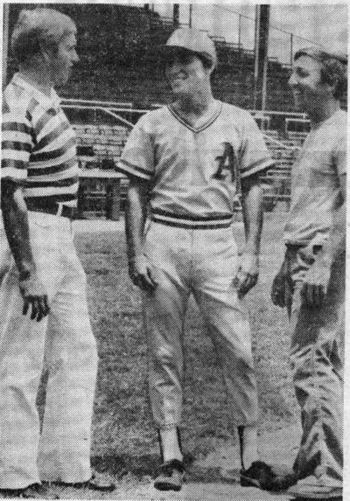 The Alabama Barons were a short-lived professional baseball team which played in Art Peterson's "Freedom Baseball League" for five games in 1978. The league was wholly owned by Peterson, a resident of Falls Church, Virginia. The other three teams were all located in the vicinity Washington D.C.

Birmingham-Southern Panthers coach Roy Mewbourne was hired to manage the club. Kenny Gonzales was general manager and the 18-man roster, culled from a total of 65 players who tried out, featured a number of undrafted college graduates, mostly from Alabama. The other teams' rosters also mixed in several former professionals looking for another chance.

The league opened play for a planned 35-game season on July 2 with the Barons defeating the Washington Senators 10-9. The Barons also swept double headers on the following two days at Rickwood Field. With Peterson unable to close a deal with the owners of RFK Stadium, he was forced to suspend play with only those five games in the book and the visiting Barons cooling their heels in a Washington hotel.

The two other teams never played. The Barons, at 5-0, became the de facto champions of the aborted league. The Barons' star player was Alan Robinson, a 6-foot-4 infielder who went undrafted out of Memphis State. In five games he got seven hits in 13 at-bats for a .538 average with 2 home runs, nine runs, and 5 runs batted in.

The players were promised a $700 a month salary and were due half of that when the league folded.