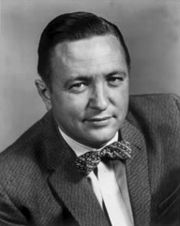 Alf Van Hoose, Jr (born 1920; died 1997 in Birmingham) was a sportswriter for The Birmingham News for 43 years, including 21 as sports editor and 10 as a featured columnist.

Van Hoose dreamed of a baseball career, but was passed over at a try out for the St Louis Browns. He attended Livingston High School and the University of Alabama before he was drafted in 1942 for duty during World War II. He rose to the rank of Captain and earned a Silver Star at the Battle of the Bulge. He returned to Alabama and began working for the News in 1947. He covered the Birmingham Barons and Southeastern Conference football as well as national sporting events and news. He was also a contributing editor for Golfing Alabama magazine.

He was promoted to sports editor in 1969 and retired in 1990. During the Vietnam War he went and photographer Tony Falleta deployed with the First Infantry Division and sent back a series of front page columns from Viet Nam. Later he returned to Europe to write about the 50th anniversary of the American experience in World War II.

Selected columns from Van Hoose's long career were collected by editors Creg Stephenson and Ed Mullins for the 2009 book More Than a Game: The Best of Alf Van Hoose published by the University of Alabama Press's Fire Ant Books label.