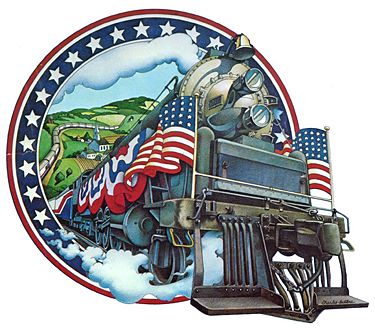 The American Freedom Train was a national educational tour which brought notable American artifacts to railroad stops across the country during the celebrations of the Bicentennial of the United States. It began its journey in Alexandria, Virginia on December 19, 1974 and came to a stop in Miami, Florida on December 31, 1976.

The 26-car train included 10 exhibit cars which were opened to the public and two cars that held larger artifacts behind showcase windows visible from the exterior. The exhibit consisted of over 500 objects selected to tell the story of America's successes.

The Freedom Train stopped in Birmingham on May 27-31, 1976. While here it changed locomotives, picking up a newly-restored Reading 2101 "T-1" and dropping off its Southern Pacific 4449 "Daylight" engine for servicing at Southern Railway yards. Also in Birmingham the Pacific Northwest tool car #76 that trailed the locomotive was finally painted with the "American Freedom Train" lettering.

After being refurbished in Birmingham, the 4449 made a steam excursion to Alexandria, Virginia in August 1976. It then carried a cross-country excursion from Birmingham to its home in Portland, Oregon from April 13 to May 1, 1977. It continues to run steam excursion services from Portland's Oaks Park Station.

Preceding the Freedom Train in Birmingham was a General Motors-made Union Pacific E-9A #951, dubbed the "Preamble Express". That train arrived on October 7, 1974, having scouted the route from New Orleans, Louisiana.

Car No. 1-The Beginning

Car No. 2-Exploration and Expansion

Car No. 3- Growth of the Nation

Car No. 10-Conflict and Resolution

An earlier Freedom Train which toured the country in the late 1940s was scheduled to stop in Birmingham, but did not because the city's requirement that the attraction be opened only on a segregated basis was not accepted by the sponsoring American Heritage Foundation. In addition to Birmingham, the train's stop in Memphis, Tennessee was also cancelled for the same reason. Following the well-publicized cancellation, other cities amended their requirements and the train did make numerous stops in other Southern cities, including Mobile, Montgomery and Tuscaloosa (on December 28, 1947).