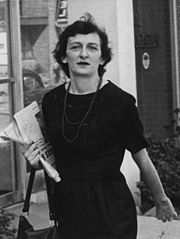 Anne McCarty was raised in Anniston. While studying at Stratford College in Virginia she became motivated to become active in efforts to further racial equality in the United States. She worked as a newspaper reporter for the Anniston Star and Birmingham News, where she covered the courthouse beat. She told her biographer that "covering the Birmingham courthouse made a radical out of me." Her exposure to a system in which violence against African Americans was ignored while black suspects were treated harshly cemented her commitment to opposing injustice. Anne returned home to Kentucky as a writer for the Louisville Times in the 1940s. She married Carl Braden, a union activist on the staff of the Courier-Journal, in 1948.

The Bradens were both active in social issues and actively supported the presidential campaign of Progressive Party candidate Henry Wallace. They left their mainstream newspaper jobs to apply their talents to supporting the Farm and Equipment Workers Union at Louisville's International Harvester plant. In 1950 Anne spearheaded a hospital desegregation drive in Kentucky and, a year later, led a delegation of Southern white women to protest the execution of Willie McGee in Mississippi, where she was arrested.

In 1954 African-American veteran Andrew Wade approached the Bradens for help in purchasing a home in Louisville suburb of Shively. The Bradens circumvented segregated real estate practices by purchasing the home on their behalf. On the night they moved in, the Wades were welcomed with verbal assaults, gunshots and burning wooden cross. Six weeks later the home was damaged by a bomb. Vernon Brown, an associate of the Wades and Bradens, was indicted for the crime. During the investigation the political leanings of the Bradens and their supporters were brought into question. In October they were among five people charged with sedition under state law. Carl was the first to be convicted and was sentenced to 15 years in prison. A United States Supreme Court decision invalidating state sedition laws allowed his release after eight months.

Remaining in Louisville, the Bradens worked as field organizers for the Southern Conference Educational Fund and wrote for its Southern Patriot newsletter and for the numerous pamphlets and press releases issued by the group. They also became friends with Fred Shuttlesworth, who split time between Birmingham and his congregation in Cincinnati, Ohio. Shuttlesworth, unlike many in the organized Civil Rights Movement, freely associated with the Bradens despite the shadow of subversion that had been cast over them. The Bradens both attended the 1962 Southern Conference Education Fund Conference, which, at Shuttlesworth's urging, was held in Birmingham.

Anne authored a memoir of their prosecution for sedition, entitled The Wall Between in 1958. The book was praised by Martin Luther King, Jr (who mentioned her in his "Letter from Birmingham Jail") and Eleanor Roosevelt, and was a runner-up for a National Book Award.

The couple remained active and outspoken on Civil Rights issues. After Carl's death in 1975 Anne helped found the Southern Organizing Committee for Economic and Social Justice (SOC) which took on cases of environmental racism. She was active in the Rainbow/PUSH coalition of the 1980s and campaigned on behalf of Jesse Jackson's presidential bids. Her activism broadened to include general environmental, gender and anti-nuclear protests. She contributed articles to Southern Exposure, Southern Changes, the National Guardian and Fellowship and focused her activism on local campaigns in Louisville. She also tried to encourage Shuttlesworth, still living in Ohio, to return to Birmingham as a leader in ongoing Civil Rights efforts.

Anne was awarded the inaugural "Roger Baldwin Medal of Liberty" by the American Civil Liberties Union in 1990. She died at Louisville's Jewish Hospital in 2006. The Anne Braden Institute for Social Justice Research was established at the University of Louisville, opening in 2007.