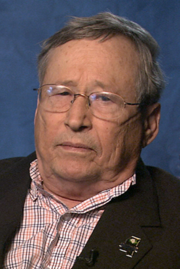 Howard Barry Hannah (born April 23, 1942 in Meridian, Mississippi – died March 1, 2010 in Oxford, Mississippi) was the author of eight novels and five short story collections and directed the Master of Fine Arts program at the University of Mississippi.

Hannah grew up in Clinton, Mississippi and enrolled at Mississippi College there in a pre-medical course before switching his focus to literature. He completed his bachelor of arts in 1964 and went on to complete a master of arts and a master of fine arts at the University of Arkansas. While there he published his first story in a national anthology of college writing and completed the story that convinced him, personally, of his abilities: "Mother Rooney Unscrolls the Hurt," which became part of his first novel Geronimo Rex.

Published in 1972, Geronimo Rex won the William Faulkner Prize and was nominated for a National Book Award. After a relatively poorly-received second novel, Nightwatchmen, he returned to the short story form and won the support of Esquire fiction editor Gordon Lish. A compilation of Hannah's stories was published under the title Airships in 1978. He followed that with the short novel Ray (1980) which was set in Tuscaloosa and bolstered his reputation as an important author.

Hannah's 1993 short story collection, Bats Out of Hell was followed in 1996 by another collection High Lonesome that earned him a Pulitzer Prize nomination. He was diagnosed with non-Hodgekin's lymphoma and underwent treatment in the late 1990s. His next novel, Yonder Stands Your Orphan came out in 2001 and featured many characters that had been introduced in earlier stories.

Excerpts from a follow-up novel, given various titles, were published in various magazines from 2003 to 2009. In an interview that year, Hannah told Tom Franklin that the book was being re-cast as a series of short stories.

Hannah taught at Clemson University while he was writing Geronimo Rex. He helped to create the Master of Fine Arts program in writing at the University of Alabama during the 1970s, leaving in 1980.

For 28 years, Hannah taught creative writing at the University of Mississippi and became the director of the school's MFA program. While there he mentored numerous authors including Larry Brown, Cynthia Shearer and Donna Tartt.

In addition to the Faulkner Award for his first novel, Hannah has received the Award in Literature from the American Academy and Institute of Arts and Letters, the Robert Penn Warren Lifetime Achievement Award, and the PEN/Malamud Award for excellence in the art of the short story. He was twice awarded the Fiction Prize of the Mississippi Institute of Arts and Letters and received a Governor's Award from Mississippi Governor for distinguished representation of the state in artistic and cultural matters.

Hannah died on March 1, 2010, just days before the annual Oxford Conference for the Book during which he and his works were the central focus. He was survived by his wife and three children.