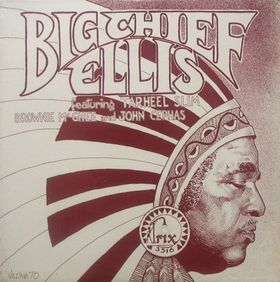 Ellis' parents, Lem Ellis and Climmie Reddlery, didn't allow music in their home, so he taught himself piano at his aunt's house in exchange for cutting her grass. He played local parties and dances in Birmingham in the late 1920s and traveled the country performing and doing odd jobs during the Great Depression. He also became a gambler. His composition "Dices, Oh Dices" was recorded first by fellow pianist Walter Roland in 1933. In 1939 Ellis joined the U.S. Army and was stationed at Fort McLellan during World War II. He was granted his discharge in 1942.

Ellis then moved to New York City and drove a taxi cab and managed various nightclubs while accompanying other blues artists on stage and in the studio. He recorded on Lenox Records in 1945, and later with Sittin' In, and with Sonny Terry and Brownie McGhee for Capitol Records in the 1950s. By 1972 Ellis had moved to Washington D.C. and operated a liquor store. He heard Phil Wiggins and John Cephas at a party and invited them to play with him as the "Barrelhouse Rockers".

Trix Records' Peter Lowry tracked Ellis down in D.C. and set up a series of recording sessions at his home in Kottekill, New York with Cephas and Tarheel Slim in 1974 and 1975. Four more tracks were recorded in 1976 in Joe Wilson's house in Hyattsville, Maryland. With the new album release, Ellis returned to performing, including a slot at the Philadelphia Folk Festival. He was scheduled to embark on a European tour with Cephas and Wiggins in 1978.

In 1977, though, Ellis and his wife moved back to Birmingham. He died at University Hospital of heart failure that December and is buried at Shadow Lawn Cemetery.