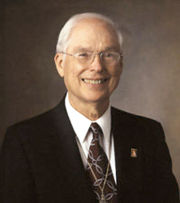 Steltemeier attended Chaminade College Preparatory School in St Louis, Missouri and graduated from Vanderbilt University in Nashville. He married the former Ramona Schnupp on August 22, 1953 before graduating from Vanderbilt Law School. He then served for two years in the Army in France. After returning home, he went to work for the Burroughs Corporation. In 1960 he co-founded the law firm of Steltemeier & Westbrook, specializing in commercial and bankruptcy law.

Steltemeier was active in prison ministries in Nashville. He served on several non-profit boards and was appointed to a state review board for prison reform. Bishop Joseph Durick ordained Steltemeier as a permanent deacon for the Diocese of Nashville in 1975 and he was appointed as Catholic chaplain to the Tennessee State Prison.

Steltemeier met Mother Angelica at a legal convention in Chicago, Illinois in March 1978 and subsequently made a large donation which helped her build a broadcast studio at the Our Lady of the Angels Monastery in Irondale.

Steltemeier joined the founding board of EWTN, serving as the first president of the media company. He resigned from his firm to work full-time for EWTN in 1985, and succeeded Mother Angelica as chairman and CEO at her retirement in 2000. He moved to Hanceville in 2002 and retired as CEO in 2009.

Steltemeier died in 2013 and was survived by his wife, Ramona. He is buried at Calvary Cemetery in Nashville.