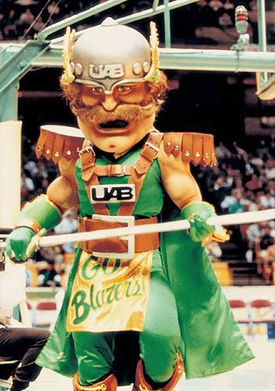 Blaze the Viking was the official costumed mascot for the UAB Blazers athletic teams in 1993 and 1994.

The costumed Viking warrior debuted at a men's basketball game against Marquette University on January 9, 1993. His tendency to frighten children led to his retirement the next year.

Blaze the Viking was clad in a green sleeveless bodysuit with padded arms and green gauntlets trimmed in gold. He wore a gold loincloth with "Go Blazers" written on it, a long green cape and a silver helmet with gold wings. He also wore a wide leather belt and suspenders with leather-fringed shoulder covers and leather boots. His face featured a broad walrus mustache and wavy gold hair. His bare chin had a prominent dimple and his expression evoked a grimacing open-mouthed yell. Blaze also carried a long sword with a gold pommel.