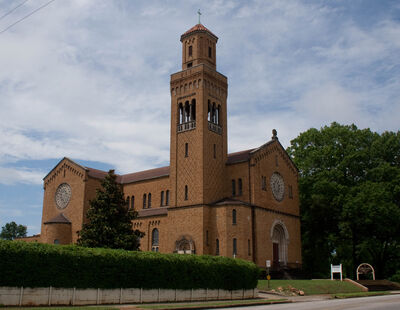 The Parish was founded in 1910 by members of the Catholic Ladies Club, who erected the first building for worship in October 1911.

Between 1928 and 1930 a new Romanesque-style brick building was constructed for the parish. It was designed by architects John J. Carey and Paul Dowling of Mobile. It hosted its first mass on February 17 of that year. Interior furnishing and stained glass windows for the church were completed during the 1950s. The decoration includes a red marble altar and baldachin along with painted murals.

As of 2021, Blessed Sacrament is the only Catholic church in metropolitan Birmingham authorized to regularly hold the traditional Latin mass.

The structure qualified for a Jefferson County Historical Commission marker in 2010, was added to the Alabama Register of Landmarks and Heritage in 2011, and to the National Register of Historic Places in 2015.