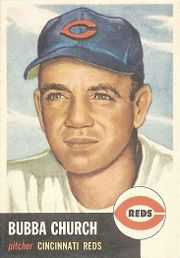 Church was drafted in 1947 by Philadelphia out of Mississippi State University. During his rookie season, Church was playing a key role for the famed 1950 "Whiz Kids" Phillies in their fight for a pennant. He was an important member of a very young pitching staff, teaming with Robin Roberts, Curt Simmons, Bob Miller, and the dependable reliever Jim Konstanty. However, Church was struck in the face by a line drive off the bat of Cincinnati's Ted Kluszewski. The ball was hit so hard that it caromed into right field on the fly. A week later, he was out on the mound again to face the hard-hitting Dodgers, but after the game his season was over. He finished 8-6 with an ERA and two shutouts in 142 innings.

Church enjoyed his most productive season in 1951, when he collected career-highs in victories (15), strikeouts (104), shutouts (4) and innings (246), including a one-hitter over Pittsburgh. Early in the 1952 season, he was traded to the Reds. Church was 5-9 for Cincinnati, and 7-8 for the Reds and the Chicago Cubs in 1953. Two and a half more seasons with the Cubs, pitching only occasionally because of arm problems, brought his big league career to an end in 1955.