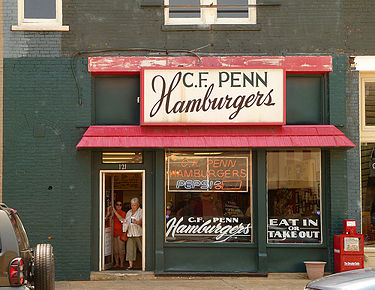 C. F. Penn Hamburgers is a restaurant founded by Charles Franklin Penn in Hartselle (Morgan County) on April 22, 1927. In 1939 a second location opened in Decatur, where it remains the last of the chain. Birmingham got a location in the 1950s, and Cullman in 1966.

The standard Penn hamburger "all the way" is a deep-fried hand-formed patty served on a bun with mustard and onions. The original 10¢ price increased to 14¢ during World War II and 20¢ in 1962. French fries, onion rings, hot dogs and chicken fingers were added to the menu in later years.

Charlie Hodge, a friend of Elvis Presley's, introduced him to the burgers, which were soon a regular staple at Graceland, delivered by the dozens. Time Warner chairman Don Logan also had burgers delivered to his New York office, packed in dry ice for the trip.