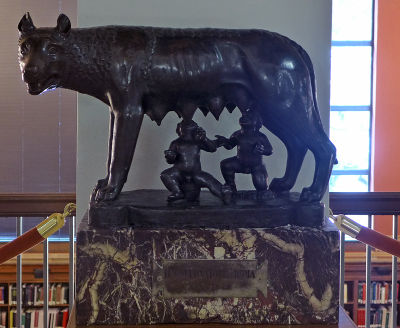 The "Capitoline Wolf" ("Lupa Capitolina") is a bronze sculpture depicting the founding myth of Rome which is displayed on the second floor of the Linn-Henley Research Library. It was presented to the City of Birmingham on the occasion of an exhibition of Italian paintings from the Kress Collection in the early 1930s.

The statue is a copy of a 45" long by 30" tall Medieval bronze sculpture long revered as the one described by Cicero and others as being displayed in the Forum on the Capitoline Hill during Rome's Classical era. It is possible that the 11th-12th century bronze is, in fact, a copy of an older sculpture. In legend Rome was founded by Romulus and Remus, born princes of Alba Longa, grandsons of King Numitor and descendants of Aeneas. Numitor's brother, Amulius, usurped the throne and ordered the infant boys drowned in the Tiber. Instead, having been rescued by a she-wolf who nursed them, the boys were raised by the shepherd Faustulus and eventually overthrew their uncle, Amulius. Thereafter they ventured to found their own fortified city. A dispute arose and Remus was killed, leaving Romulus as founder and namesake of Rome.

The replica statue was presented to Birmingham by Giacomo de Martino, Italy's Envoy to the United States. According to a brass plaque affixed to the statue's marble base, the donor was "Il Governatore di Roma", then Francesco Boncompagni Ludovisi. It is dated "Anno IX E.F.", referring to the ninth year of the "Era Fascista" which began when Benito Mussolini led a march of 30,000 "blackshirts" to claim the power of government from King Victor Emmanuel III. The statue's dedication therefore indicates the year between October 29, 1931 and October 28, 1932. It was Mussolini himself who instructed that reproductions should be distributed to cities in the United States.

During World War II, while Italy was fighting as part of the Axis Powers, the library removed the sculpture from public view.