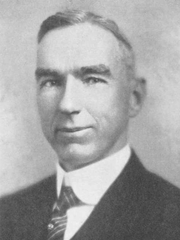 Charles Bowles Glenn (born December 1, 1871 in Auburn; died April 21, 1967 in Birmingham) was superintendent of the Birmingham City Schools from 1921 to 1942, and president of the National Education Association from 1937 through 1938. Glenn was one of the earliest proponents and implementors of character education in schools.

Glenn, the son of Emery Thomas and Helen Elizabeth Hunter Ross Glenn of Auburn grew up there while his father served as treasurer of the Agricultural and Mechanical College of Alabama there. He graduated from Auburn High School and helped lay the first brick at Samford Hall in 1887.

He continued his education at the University, earning a bachelor of science in 1891 and a master's in 1892. He began his teaching career as an instructor at the Southwest Alabama State Agricultural School in Evergreen (Conecuh County) in 1893. In 1895 he enrolled at Harvard University and completed an A.B. in 1896. in 1898 he was appointed principal of the Paul Hayne School in Birmingham, serving in that position until he was promoted to assistant superintendent of schools under John Herbert Phillips in 1909. He succeeded Phillips after his death in 1921.

As superintendent, Glenn implemented character education programs in the Birmingham schools, among the first such programs in the United States. He and Birmingham Board of Education chairman Erskine Ramsay oversaw a massive expansion of the system to accommodate the population growth of the 1920s. Between 1923 and 1930, Birmingham passed two major bond issues to construct dozens of schools. Even today, most of the city's schools date from those years.

Glenn also pushed for significant expansion of educational opportunities for African Americans, particularly in the area of vocational education, a position which earned him the enmity of the Ku Klux Klan. In 1937, Glenn was elected president of the National Education Association, and also served as the head of the American Association of School Administrators.

Glenn retired as superintendent of the Birmingham schools in 1942. He remained with the system for another year as director of counseling and guidance, and kept the title of "Superintendent Emeritus" until his death. He authored several magazine and journal articles, spent his summers teaching education courses at the Ohio State University in Columbus, Ohio, and traveled around the United States as a consultant.

In 1953, the Birmingham Board of Education named the new Charles B. Glenn Vocational High School in Bush Hills in his honor.