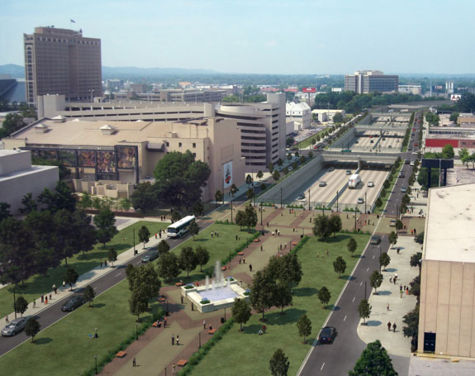 2010 rendering of the interstate lowering proposal with a decked plaza

The City Center interstate lowering was a proposal to lower the I-20/59 downtown viaduct through Birmingham's City Center in order to improve surface-level connections between the municipal complex surrounding Linn Park and the Birmingham-Jefferson Convention Complex to the north.

Although the need for an improved connection had been expressed before (notably as part of the design competition for the BJCC), the current proposal was first presented in 2004 as part of the City Center Master Plan prepared by Urban Design Associates. That plan envisioned creating a below-grade corridor for the interstate, paralleled by surface boulevards with simplified access and egress in the downtown area. Wide plaza-like pedestrian bridges could then span the highway, providing more pleasant public urban spaces, as well as opening up new sites for commercial development. The idea was vocally supported by Operation New Birmingham, the Regional Planning Commission of Greater Birmingham, and adjacent institutions such as the Birmingham Museum of Art and BJCC.

Some critics referred to the project as a "Big Dig", alluding to the $15 billion project to route Interstate 93 through a 3.5 mile tunnel in downtown Boston, Massachusetts. That project, which was many times larger and more complex than the Birmingham proposal, saw costs swell greatly from early estimates and was marred by construction errors which endangered the public, resulting in numerous lawsuits.

The City Center Master Plan was formally accepted by the city at the October 20 presentation, but not adopted in any legal sense. Proposed zoning changes that would formalize some of the planning intentions and lift barriers toward implementation were drafted in 2006.

The Civic Center interstate-lowering project was the subject of a preliminary traffic study performed by Parsons Brinckerhoff of New York. That study determined that the project could take four years to construct, at a cost greater than $600 million. It also predicted that the city would gain substantial benefits from the undertaking, which is similar to a completed project to lower Fort Washington Way in Cincinnati, Ohio. The Alabama Department of Transportation (ALDOT) reviewed the preliminary engineering work and, with a few changes, accepted the basic design as feasible.

A request for $2 million for additional studies was made to the state's legislative delegation, to be included in the state's application for federal funding in the Economic Recovery and Reinvestment Act of 2009. The Community Foundation of Greater Birmingham granted the project $20,000, which helped secure another $80,000 in federal grant money to continue preliminary studies. Parsons Brinckerhoff worked with graduate students in traffic engineering at UAB to create more detailed traffic models.

In 2012 ALDOT announced they would proceed with replacement of the existing bridge decks in early 2013. The $700 million estimated cost of lowering the interstate had been deemed "too expensive to pursue". In July, Birmingham and Jefferson County officials asked ALDOT to evaluate the possibility of re-building the elevated highways from the ground up. Possible improvements if that idea were pursued included adding traffic lanes, reducing road noise, and replacing metered parking below the bridge with "green space".

The deck replacement proposal was ultimately approved by ALDOT and budgeted at $420 million. Director John Cooper stated at the time that his department, "has received a lot of feedback from the community, and we believe we have addressed the key concerns while exploring the best pathway forward for this project." The first contract for construction of Phase I was awarded to Brasfield & Gorrie in July 2015.

Opposition to the proposal galvanized under a non-profit group named Move I-20/59 headed by Darrell O'Quinn. They filed a federal lawsuit in October 2015 claiming that the agency had failed to adequately study alternatives, but the suit was dismissed.