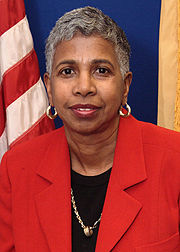 Cleopatra G. Tucker (born April 9, 1943 in Birmingham) is a member of the New Jersey General Assembly, representing that state's 28th legislative district since 2008.

Tucker grew up in Birmingham and was active in the Colored Women’s Federation, which organized volunteer efforts at local hospitals. She studied sociology at Miles College, then moved to Newark, New Jersey in 1966. In 1976 she took a job with the Newark Housing Authority, and retired from that agency as director of inventory control in 2002. Since then she has served as executive director of "The Centre, Inc.", a non-profit founded by her former husband, Donald Tucker, to provide programs and activities for Newark-area youth.

Tucker ran successfully for her late husband's former assembly seat in 2007. In January 2011 she introduced, then quickly withdrew, a bill that would have required every bicycle in the state of New Jersey to be registered and to display a license plate.