From Bhamwiki
(Redirected from Club Hotel)
Jump to: navigation, search 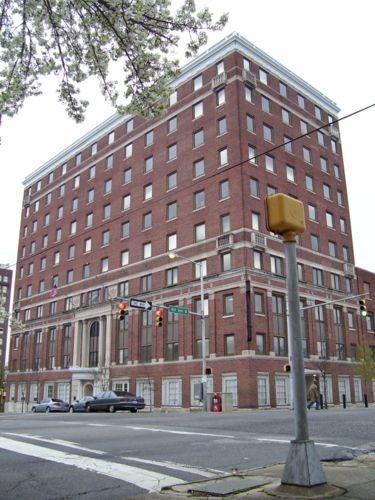 The YWCA Building (formerly the Birmingham Athletic Club, Dixie-Carlton Hotel and Club Hotel) is a 10-story building located on the northeast corner of 3rd Avenue North and 23rd Street in downtown Birmingham. It was constructed around 1925 for the Birmingham Athletic Club, which operated it for some years as a clubhouse with apartments above. They converted the residences into hotel rooms, but soon decided to sell the building, though it continued to lease its clubhouse space.

Hooper's Cafe, a fine-dining restaurant operated by John Carlton Hooper moved into the ground floor corner in the early 1930s.

J. Will Yon of Atlanta, Georgia purchased the building in 1939, but sold it a year later to Albert Noe, Jr of Jackson, Tennessee, who opened the Dixie Carlton Hotel there, with his nephew J. Newton Wall as manager. Noe renovated the rooms and public spaces, adding a coffee shop. The Athletic Club expanded its use of the building with the addition of a health club. Bob Goss was the last manager of the hotel.

In 1948 the Birmingham YWCA purchased the building and spent nearly $1 million on renovations. In 1974 another major renovation gave the YWCA a residential capacity of 198 in single and double rooms, efficiencies and one-bedroom apartments. New laundry facilities, self-service elevators, insulated windows, and air-conditioning were also added, along with refurbishment of the lobby, gymnasium, swimming pool and corridors. Brice Building Company performed the work. Another $10.5 million refurbishment was completed in 1999. In addition to its administrative offices, the YWCA operates a homeless child care program, a Women's Resource Center, a Chapel Gallery, and 64 residential units in the building.