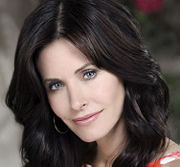 Courteney Bass Cox (born June 15, 1964) is an actress, best known for her role as Monica Geller in the long-running television series Friends.

Cox was born in Mountain Brook. her late father, Richard L. Cox, was a businessman and her mother, also named Courteney, was a housewife. Cox has two older sisters (Dottie Pickett and Virginia Cox), one older brother (Richard, Jr) and nine half-brothers and half-sisters. Her parents divorced in 1974, and her father moved to Florida, while Cox grew up with her mother and stepfather Hunter Copeland.

Cox attended Mountain Brook High School, where she was a cheerleader, tennis player and swimmer. Upon graduation, Cox went to study architecture and interior design at Mount Vernon College. She dropped out after one year to pursue a modeling career, after being signed by the Ford modeling agency in New York City. While modeling, she also took acting and voice classes. 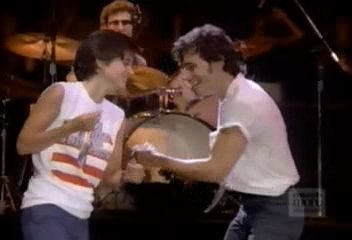 Cox with Springsteen in "Dancing in the Dark"

After her first appearance in the 1984 music video for Bruce Springsteen's "Dancing in the Dark", she was cast in several theatrical films, including Masters of the Universe (1987) and Cocoon: The Return (1988). She had a starring role in the short-lived television series, Misfits of Science (1985) and later had a recurring role (1987 - 1989) as Alex Keaton's girlfriend, Lauren, on the television series Family Ties.

Cox is best known for playing Monica Geller on the hit TV series Friends (1994 - 2004). She became the only principal member of the show's cast not to be nominated for an Emmy Award. After the show became successful, Cox appeared in several high-profile films, including Ace Ventura: Pet Detective (1994), the three Scream films (1996-2000) and 3000 Miles to Graceland (2001). In 2009 she began a critically-acclaimed star turn on the ABC comedy "Cougar Town".

While on the set of Scream, Cox became involved with co-star David Arquette. The couple married on June 12, 1999 at Grace Cathedral in San Francisco, California. They have one daughter, Coco Riley Arquette, born June 13, 2004. While married, Cox changed her name to Arquette. Courteney and David divorced, following two years of separation, on May 29, 2013.