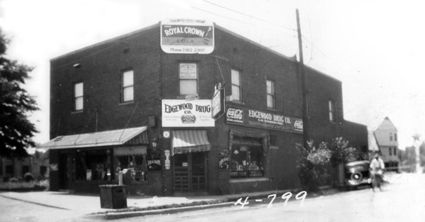 The Edgewood Drug Company was a pharmacy and store located at 931 Oxmoor Road, on the southwest corner of the intersection with Broadway Street. Opened in 1924 by John Callaway, the store was the first retailer in what became the heart of Homewood's Edgewood Business District. The drug store was joined in the building by the Edgewood Grocery Company in 1927. By 1928 the drug store was operated by pharmacist and Homewood City Council member C. W. "Doc" Temerson, who continued to operate it into the 1950s. Ann Lambert founded the Homewood School of Ballet on the upper floor in 1954.

The building was later occupied by the Greene Mar Drugs, Markle Discount Drugs, Markle Home Health Care Center, and Pet Safari. It was renamed the Markle-Reed Building while it was owned by Markle-Reed Properties. It currently houses the Blonde Salon Spa.