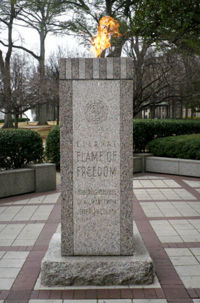 The Eternal Flame of Freedom is a monument located on the southwest corner of Linn Park. The rectangular shaft is constructed of dark- and light-gray granite and features a natural gas flame on top. It faces south, out of the park and toward the intersection of Park Place and Short 20th Street. It honors the memory of Jefferson County veterans of all wars.

The monument was commissioned from Clark Memorials by local American Legion posts and "patriotic interests" on the occasion of the Legion's 50th anniversary. It was dedicated to the citizens of Jefferson County on Saturday evening, March 15, 1969. Marine Staff Sgts Frank Hutchins and William C. Smith stood guard representing all Jefferson County veterans at the cermony. Cooper Green, then President of the Jefferson County Commission, accepted the marker with the words, "the county accepts with humility the task of maintaining the Flame of Freedom as a perpetual monument."

In recent decades the City of Birmingham has assisted a veterans group with small repairs to the gas jet, which is supplied with fuel free of charge by Alagasco. At some point in the early 21st century, the flame went out and was never repaired. Beginning in 2004 Marine reservist and Iraq War veteran Michael Rudulph began calling city and county officials about the lack of a flame on the monument.

On February 13, 2008, Rudulph, then a UAB student, began holding vigil in the park to bring attention to what he termed a "slap in the face to all who have served". Jefferson County Commission President Bettye Fine Collins faulted the city of Birmingham for the problem, saying that it rests on city property. Mayor Larry Langford's Chief of Staff Deborah Vance countered that although the city has helped with its maintenance, that it remains the responsibility of the County. Ultimately Langford worked with Alagasco to have the flame restored, and then repaired again when a gas leak forced the flame to be shut off in early March.

Site furnished by City of Birmingham