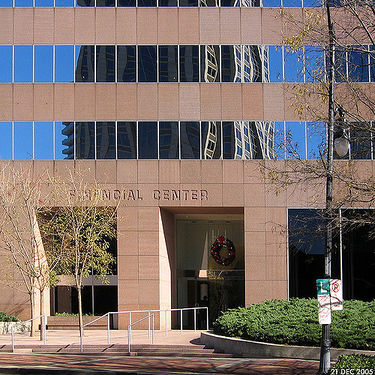 Entrance to the Financial Center in 2005

The project was developed on the site of the former Molton Hotel for Johnson-Rast & Hays, with financing from The Equitable Life Assurance Society. Originally proposed as a 25-story tower in 1979, the shorter, pink-granite clad building designed Giattina, Fisher & Company was completed in 1982. Estimates of the cost of construction ranged from $14.5 million to $28 million. The developers contracted with the Birmingham Parking Authority for 350 reserved spaces in the 408-space BPA Deck 5, which opened in 1983.

The stainless steel "Winged Victory" by sculptor Brad Morton was installed outside the building in 1999.

On July 19, 2013 the building was sold by FCB, LLC to the Allegiance Realty Corp. of Charlotte, North Carolina. They immediately planned $3-5 million in renovations to lobbies, elevators and landscaping. PKA Architects designed the renovations, which were contracted to Rives Construction.

In 2016 the building was purchased by a partnership headed by the Daniel Corporation, which moved its 50-employee headquarters offices there from 3660 Grandview Parkway. In 2020 the partnership sued the Birmingham Parking Authority for not providing access cards for the full allotment of reserved spaces. The parties reached a settlement in October.