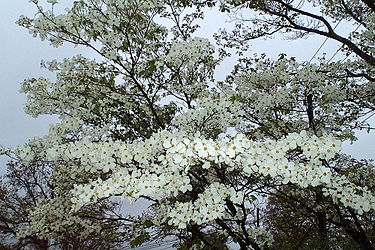 Flowering dogwood (Cornus florida) is a type of dogwood tree native to the Eastern and Southeastern United States. In the forest, the tree can reach 30 feet tall with low, spreading branches and a flat crown. The name was originally "dagwood", reflecting the use of its very hard wood in making "dags" (skewers).

The tree is characterized by its broad thin leaves with curving veins, turning crimson or purple in Fall. In early Winter the tree produces bright red drupes, the seeds of which are distributed by birds which feed on them. In Spring the small yellow-green flowers appear before the leaves and each cluster is surrounded by four large white bracts (often mistaken for petals). Cultivated varieties sometimes produce pink or red hues in the bracts. The thick gray bark breaks into rectangular plates.

Dogwood has been used historically for small parts subject to heavy wear such as mallets, loom shuttles, golf club heads, tool handles, rake teeth, and fruit press screws. It is not a widely available commercial wood. The cross-shaped inflorescence of the flowering dogwood has been used as a symbol of Christianity.

The tree is common in forest understories in uplands, slopes and streambanks. Its range stretches from Southern Canada to Eastern Texas. It is slow growing and drought tolerant, but has recently been effected by "dogwood anthracnose", a deadly fungus.

The dogwood is a celebrated ornamental in urban and residential areas in the Birmingham District. Vestavia Hills celebrates a Dogwood Festival each Spring.