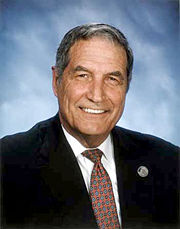 Eugene Clifton "Bebes" Stallings, Jr (born March 2, 1935 in Paris, Texas) was the head football coach for the Alabama Crimson Tide from 1990 to 1996, including a National Championship-winning team in 1992. He was also an assistant under legendary head coach Bear Bryant from 1958 to 1964, helping win championships in 1961 and 1964.

Stallings grew up in Texas, graduating from Paris High School. An outstanding athlete, he was captain of the football, baseball and golf teams. Recruited by Ray George to play for the Texas A&M Aggies. George was subsequently replaced by Paul "Bear" Bryant, who famously took the team to isolated Junction, Texas for ten days of grueling summer drills. Stallings was one of the 30 or so "Junction Boys" that remained with the squad, which suffered through a 1-9 season in 1954. Two years later, he played on the team that went 9-0-1 and brought home the Aggie's first Southwest Conference championship since 1939. He graduated with a bachelor of science in 1957 and, a year later, joined Bryant's coaching staff as a defensive assistant at the University of Alabama.

Following the 1964 season, Stallings, then 29, was named the head coach for Texas A&M. He remained for seven seasons and amassed a record of 27-45-1 with one Southwest Conference title coming in 1967.

In 1972 Stallings moved into the professional ranks as secondary coach for the Dallas Cowboys under Tom Landry. He remained with the team for 14 years and one Super Bowl victory before being named head coach of the St Louis Cardinals. He spent four years with the Cardinals, a tenure during which the team moved to Phoenix, Arizona. He had some success with his first teams, but late-season collapses produced losing seasons and his record for four years was 23-34-1. He announced his resignation during the 1989 season and was immediately replaced by running backs coach Hank Kuhlmann.

In 1990, the University of Alabama hired Stallings to replace Bill Curry as head coach of the Crimson Tide. His 1990 team went 7-5 and earned bragging rights by winning the 1990 Iron Bowl. In 1991 the Tide went 11-1 and defeated Colorado in the Blockbuster Bowl.

With a punishing defensive squad, the 1992 Crimson Tide team finished the regular season 12-0, then defeated the Florida Gators in the first SEC Championship Game at Legion Field before embarrassing the Miami Hurricanes in the 1993 Sugar Bowl to wrap up a perfect 13-0 season and a consensus National Championship. Stallings was named "Coach of the Year" by the American Football Coaches Association, the Football Writers Association of America, the National Sportscasters and Sportswriters Association, the Walter Camp Football Foundation, the Maxwell Football Club, and the Southeastern Conference.

The 1993 team successfully defended its divisional title despite losses to LSU and Auburn and a 17-17 tie with Tennessee. The Tide lost the SEC Championship rematch with Florida and finished 9-3-1 with a victory over North Carolina in the Gator Bowl. The 1994 team again went undefeated in the regular season, but lost again to Florida in the first SEC Championship played in Atlanta's Georgia Dome. They went on to beat Ohio State in the Citrus Bowl for an overall 12-1 record. Stallings was awarded his second "Coach of the Year" honor from the SEC.

In August 1995 the National Collegiate Athletic Association (NCAA) completed a two-and-a-half-year investigation into the eligibility status of defensive back Antonio Langham. The organization determined that Stallings and athletic director Hootie Ingram were complicit in falsifying his eligibility for the 1993 season. The Tide was required to forfeit its victories from that season, placed on a three-year probation, forced to eliminate 30 scholarships over the three years, and banned from playing in postseason games for the 1995 season. That year saw the team go 8-3 with a close loss to the western division champion Arkansas Razorbacks and another Iron Bowl loss to Auburn.

The 1996 Alabama Crimson Tide football team went 9-2, then lost again to Florida in the SEC Championship before beating Michigan in the Outback Bowl. On November 23 of that year, Stallings announced his resignation. He completed his tenure at Alabama with a 70-16-1 record (or 62-25 accounting for forfeited victories). His overall collegiate head coaching record, ignoring the forfeited wins, stands at 97-61-2, with a 6-1 record in bowl games.

After leaving football, Stallings moved back to Texas and has served on the Abilene Christian University Board of Trustees and the Texas A&M Board of Regents, as well as several corporate and non-profit boards. Having raised a son (John Mark Stallings) with Down's Syndrome, he was asked to serve on President George W. Bush's Commission on Intellectual Disability. He co-authored a book about how the experience affected his family.