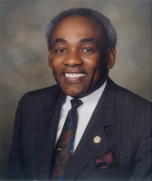 Over the next 35 years, Perdue held a number of positions at UAB, including special assistant to the president and assistant vice president for financial affairs and administration. He founded the UAB Office of Women and Minority-Owned Business Development and became its director. In that position he served on the Board of what was then called the South Regions Minority Business Council, which certifies companies for their qualification as "minority contractors" in partnerships and contracts that require minority participation. He instigated the Council's move from Mobile to Birmingham, to better serve the northern half of the state. In 2002 he was awarded the Council's A.G. Gaston Lifetime Achievement Award.

Perdue was elected to the Alabama State House of Representatives in 1982. He sponsored several changes to Alabama's competitive bid law to require more participation of minority-owned businesses in public contracts. He later chaired the Alabama Congressional Black Caucus. He decided not to run for re-election in the 2006 Democratic primary. He retired from UAB the following year. After nearly four years in retirement, he accepted the presidency of the SRMSDC on December 1, 2010. He resigned in January 2012 to focus on a home-based consulting business.

Perdue and his wife, Delores, had two daughters, Cynthia and Joy (now deceased), and one grandson.