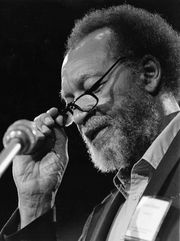 Gerald William Barrax (born June 21, 1933 in Attalla; died December 7, 2019 in Raleigh, North Carolina) was a poet and a retired professor of English and creative writing at North Carolina State University.

Gerald, the son of Aaron and Dorthera Barrax, was born in Attalla. He and his mother joined his father in Pittsburgh, Pennsylvania when he was 11. He began to write poetry when he was 18, inspired by a poem written for him while he recovered from a tonsillectomy. After graduating high school in 1951 he worked for U.S. Steel in Homestead, Pennsylvania and was introduced to the poems of Walter Benton by a coworker. He entered Duquesne University as a pharmacology major, but had to drop out due to financial difficulties. He enlisted in the U.S. Air Force and was stationed to Donaldson Air Force Base in Greenville, South Carolina as a radio mechanic.

Barrax married the former Geneva Catherine Lucy in 1954. He returned to Duquesne under the G.I. Bill after his discharge in 1957 and completed his bachelor of arts in 1963. He worked several short-term jobs while working to complete a master's degree in English from the University of Pittsburgh in 1969.

Barrax then joined the faculty of North Carolina Central University, soon transferring to North Carolina State University, where he spent the rest of his teaching career. He and Geneva were divorced and soon married the former Dellimore. Between 1970 and 1997 Barrax published five books of poems, including Leaning against the Sun, which was nominated for a Pulitzer Prize and the National Book Award. He also served as editor of the journal Obsidian: Literature & Arts in the African Diaspora, and poetry editor of Callaloo, A Journal of African Diaspora Arts and Letters.

Barrax was struck by a vehicle while crossing the street at a crosswalk in southeast Raleigh on December 7, 2019. He died from his injuries at WakeMed Hospital. He was survived by his second wife, Joan, as well as by five children and two grandchildren.