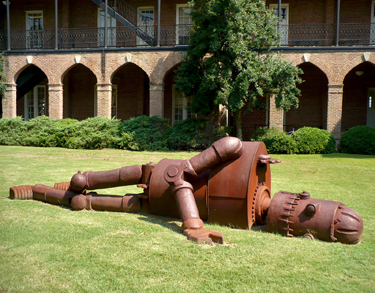 Goldie 1971 is a sculpture by Joe McCreary on exhibit in Woods Quad at the University of Alabama in 2009. The large figurative sculpture resembles a robot or mechanical man lying on its side as if sleeping or deactivated. According to the artist it represents the dormant state of the American iron industry, and specifically Sloss Furnaces, which is now a museum filled with pieces of decommissioned machinery. The figure helps recall the contributions of the dismissed human workers, signs of which are harder to find at the museum.

McCreary, education coordinator for Sloss Metal Arts, created Goldie from parts he cast at the furnaces. The cast iron and steel was sandblasted and patinaed with a mixture of salt water, vinegar, and muriatic acid to promote a uniform coat of rust. The sculpture is about 23 feet long and McCreary estimates that all together it weighs between one and two tons. The name was inspired by the welded signature of a Sloss worker made near a major repair to the No. 1 furnace in 1971.

The piece was installed at Woods Quad on April 24, 2009 and was displayed there through the fall.