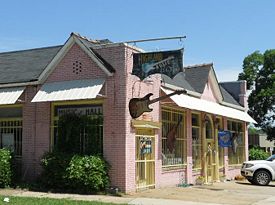 Highland Music is a guitar shop located in a pink-painted building at 3000 Clairmont Avenue. Don Murdoch first opened his store on Highland Avenue in 1981 with six guitars in stock and $5,000 in operating capital. He moved the store to its current 4,000 square-foot location in January 1997 and now carries between 300 and 500 new and vintage instruments. The store also has practice rooms, a pinball machine and a ping-pong table.

Jeff Adkins is the store's manager. Billy Gallant and Sam Timberlake man the store's repairs department, working on guitars and amplifiers, respectively. Teachers associated with the store include Ben Trechsel and Tony Lombardo.