The Hill Event Center (sometimes Hill Arts Center) is a 3,500-square-foot event facility and banquet hall operated by Birmingham Landmarks on the second floor of the former Goldstein building, adjacent to the Alabama Theatre. The lower, entrance lobby is in the space formerly occupied by Goldstein's Furs at 1811 3rd Avenue North. It is named for Ora Lee and Ernie Hill. The center's director is Holly Burrow. 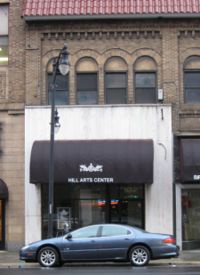 Birmingham Landmarks purchased the former Goldstein building from the estate of a Birmingham dentist in 1992. Ironically, the building stands on space Paramount had originally intended to use as part of the Alabama before construction, but the existing building's owners had refused to sell. After Birmingham Landmark's purchase, a passage between the two buildings was constructed backstage at the Alabama and the second story of the building, previously Goldstein's Furs cold storage area, was converted for use as a rehearsal hall.

Renovations to turn the space into an arts center began in February 2007 and cost approximately $800,000. According to Cecil Whitmire, Opera Birmingham patrons Ora Lee and Ernie Hill had "wanted a space … to memorialize their interest in the arts." As a result, the Hill estate paid about half the cost of renovating the space. Center director Holly Burrow, who has a degree in interior design, oversaw decoration.

The Arts Center features two lobbies, downstairs and upstairs; a catering kitchen; and a 2.470-square-foot ballroom with a 14-foot ceiling. It also houses several local artifacts that have come into Birmingham Landmarks possession, including five Louis XV-style chandeliers from the original Tutwiler Hotel, donated to Birmingham Landmarks by Freeman Andress, and a gold-leafed directory from the Lyric Theatre's office space.