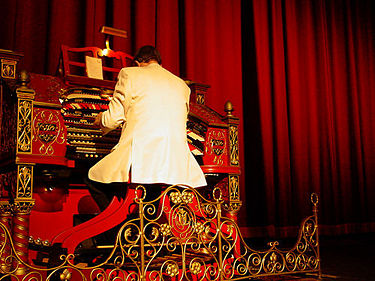 Cecil Whitmire at the Mighty Wurlitzer

Cecil M. Whitmire (born December 24, 1935, died August 22, 2010 in Corryton, Tennessee) was the president and co-founder of Birmingham Landmarks, which owns and manages the Alabama Theatre. From about 1976 until his retirement in 2007, Whitmire was also the theater's principal organist.

Whitmire grew up in Knoxville. He began taking organ lessons at the age of 12 and continued playing through his college years at the University of Tennessee and beyond to earn extra money. Whitmire's full-time job was at a wholesale hardware company in Knoxville, but he also spent 22 years as the house organist at the Tennessee Theatre.

Whitmire moved to Birmingham with his wife, Linda, in 1976 from Tennessee. Not long after, he began working as part-time house organist at the Alabama. His stint was interrupted by a 14-month return to Knoxville from 1981 to 1982. During that time, he and Linda were involved in the restoration of the Tennessee Theatre and Atlanta's "Save the Fox" campaign.

Whitmire then returned to Birmingham, working for Long Lewis Hardware. He also eventually became president of the Alabama Chapter of the American Theatre Organ Society (ATOS). When Costa and Head, owners of the Alabama, declared bankruptcy in 1986, Whitmire led the effort to save the Alabama. Birmingham Landmarks was created to be the non-profit owner of the Alabama in 1987 and Whitmire was its president until his death. 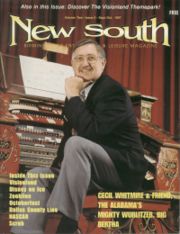 Whitmire eventually gave up his job at Long Lewis Hardware in 1992 to work full-time for the Alabama. Whitmire was also re-elected as president of the Alabama Chapter of ATOS in 1999, serving for one or two years. In 2001, Whitmire lost his wife after a long battle against cancer. The following year, he published a book about the Alabama, The Alabama Theatre: Showplace of the South, co-authored by Alabama Theatre house manager Jeannie Hanks.

In 2007, at 71, Whitmire announced his retirement as house organist. Although he was the primary organist for the Alabama classic movie series, other organists from the local ATOS chapter had been sharing those duties with him for several years and they have continued in his place. Whitmire continued to act as president of Birmingham Landmarks and as the Alabama Theatre's number one advocate until his death in 2010. He was succeeded as general manager by Brant Beene.

A public remembrance of Cecil and Linda Whitmire was held at the Alabama Theatre on September 12, 2010. It featured videos of Cecil at the organ and/or discussing the Alabama, plus some live performances. Mayor William Bell spoke and presented an official proclamation in Whitmire's honor. A second proclamation from the Birmingham City Council was also presented. Birmingham Landmarks later placed a plaque in the ticket lobby of the Alabama in honor of Cecil and Linda Whitmire and their work to save the theatre.