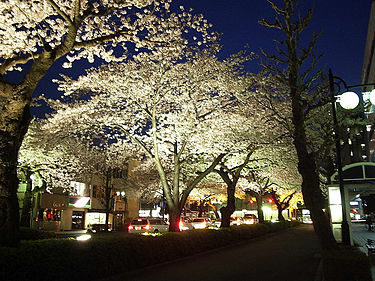 Hitachi, Japan is an industrial city of 191,688 located in the Ibaraki Prefecture on Japan's Pacific Coast. It was designated as a city on September 1, 1939 and is the home of Hitachi Ltd., a major manufacturer which was founded in 1910. The city was badly damaged by allied shelling during World War II. On April 23, 1982 Hitachi and Birmingham forged a "sister city" relationship, the first for both partners.

Birmingham first approached Hitachi about the possibility of becoming sister cities in April 1980, and the agreement was completed two years later. In April 1983 a delegation from Birmingham visited Hitachi City. In December 1984, Hitachi's Ibaraki University and UAB became "sister universities". In July 1985 Birmingham accepted the gift of a stone lantern from Hitachi, which is now displayed in the Japanese Garden at the Birmingham Botanical Gardens. That September, Birmingham presented Hitachi with a bronze replica of Vulcan, sculpted by Branko Medenica, which is displayed in Kamine Park.

Since then, numerous delegations, including junior high school-age groups from each city, have made trips to visit their counterparts overseas. During the Hitachi Industrial Festival in 2002, a "Sister City" booth was set up to exhibit and sell quilts made by Birmingham residents. In July 2003 a group of quilts made in Hitachi was exhibited in Birmingham. Since 2004, both cities have created annual "friendship quilts" as gifts. The ones sent to Birmingham from Hitachi have been exhibited at the Birmingham Public Library. Dancers and puppeteers from Hitachi participated in the 2006 Birmingham International Festival's "Salute to Japan".

In 2007 representatives of Hitachi's Kamine Zoo and the Birmingham Zoo began discussions about animal exchanges. The Birmingham Boys Choir performed in the Hitachi Civic Center in June 2009. In April 2013, Hitachi mayor Akira Yoshinari visited Birmingham and threw out the first pitch during a Birmingham Barons game at Regions Field.

During the 2020 Coronavirus pandemic, Hitachi mayor Haruki Ogawa sent a shipment of 20,000 medical masks to be distributed in Birmingham.