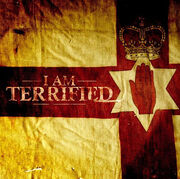 I Am Terrified is a five-piece Christian hardcore band from Pelham. It was founded in 2002 as Fixed Til Tuesday by vocalist Patrick Schefano, guitarist Jeremy Folse and drummer Joel Bailey. Bassist Dustin Carter and guitarist Brandon Henderson joined later.

The band takes its current name from Job 23:14-15: "He carries out his decree against me, and many such plans he still has in store. That is why I am terrified before him; when I think of all this, I fear him." Much of the band's lyrics, penned by Schefano, are inspired by the Baptist Hymnal.

The band celebrated the release of its 2008 self-titled EP on Nashville's Gotee Records with a concert at Life Church in Pelham.