This article is about the Alabama Power president. For others with the same name, see James Mitchell (disambiguation). 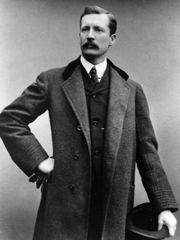 Mitchell was the son of Charles Cameron and Mary Porteous Mitchell. The young family moved to Massachusetts in 1868 where James was raised as the eldest of nine siblings. He discovered a passion for science and technology in high school and began working for the Thomson Houston Electric Company in 1884. The company sent him all across the country to troubleshoot problems with electric railway systems. In 1890 he was sent to Rio de Janeiro, Brazil to oversee implementation of electric railways in that country. He spent sixteen years there, during which time he went into business for himself and oversaw construction of Brazil's first hydroelectric dam. He returned to the U.S. in 1906 and soon associated himself with the English investment bankers Sperling & Company. He moved his family to London and traveled widely in Japan and Russia, helping them to select investments in power utilities around the world. In association with Westinghouse, Mitchell made his first visit to Alabama in 1911, viewing sites under consideration by William Lay and other promoters. Once he was satisfied with the technical potential, he met with Tom Martin and was quickly satisfied with the political potential of developing a power utility in the state, and was particularly interested in the federal legislation granting Lay's Alabama Power Company the right to construct a power station at Lock 12 on the Coosa River. Lay's only obstacle to completing the project was financing, and Mitchell had the connections to secure it.

Mitchell quickly put into practice his vision for an integrated state-wide power utility based primarily on hydroelectric power generation. His backers helped to consolidate a number of nascent development proposals under the umbrella of the Alabama Interstate Power Company and Mitchell assumed the presidency of the Alabama Power Company on May 1, 1912. As he pursued development of the utility, "for the service of Alabama", Mitchell's ability to identify and communicate opportunities for capital investments helped Alabama surpass its neighbors in the development of an electrical power grid.

Mitchell resigned as president on August 20, 1913, to focus on his other responsibilities in New York and London. He was succeeded by Frank Washburn. When Washburn left the company in March 1915, Mitchell was tapped to return to the office of president.

In April 1915 Mitchell was in New York awaiting passage on the R.M.S. Lusitania when he learned that his nephew, Nathaniel Tileston, had been killed in an accident at the Gadsden Steam Plant. By returning to Alabama, Mitchell escaped the liner's sinking by German U-boat. During World War I Mitchell sold Alabama Power's facilities at Muscle Shoals to the U.S. Government for one dollar and also invested in the production of military ordnance in Anniston.

Mitchell suffered a stroke in June 1919. He resigned from the company in February 1920 and died on [[July 22] at his summer home on Long Island after an illness. He was survived by his wife, Carolyn and two children, Malcolm and Marion. He was buried at the Milton Cemetery in Norfolk County, Massachusetts.

The Mitchell Dam constructed in 1923, and Lake Mitchell are named in his honor.