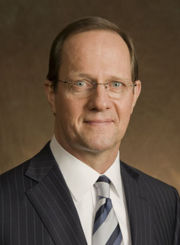 Jay Frederick Grinney (born March 20, 1951 in Milwaukee, Wisconsin) was the president and CEO of HealthSouth from May 2004 to December 2016.

Grinney was raised in Racine, Wisconsin. He worked part-time at a turkey farm while studying at St Olaf College in Northfield, Minnesota. He earned an MBA and master's in health administration at Washington University in St Louis, Missouri in 1981 and began working as a management trainee at Houston's Methodist Hospital.

He was hired by the Columbia Healthcare Corporation in 1990 and was serving as president of its Houston, Texas division when it merged with Nashville, Tennessee's Hospital Corporation of America in 1994. He became HCA's Eastern Group president until he was tapped in May 2004 to succeed founder Richard Scrushy and interim CEO Robert May as head of Healthsouth. Grinney's goals in turning the company around after a massive accounting scandal included making Scrushy "irrelevant" to the story of the company. By most accounts he accomplished that goal, focusing on acquiring and operating inpatient hospitals.

Grinney and his second wife divorced in 2005. In 2006 he was diagnosed with cancer. He underwent surgery to remove a tumor and has remained in remission.

After his retirement, Grinney remained in Birmingham. He and his third wife, Melanie, reside in Mountain Brook. He has three children from his first marriage.