Jefferson State Community College, locally known as Jeff State, is a two-year community college system serving residents of the Birmingham District since its establishment in 1965. The system has four separate campuses in Jefferson County, Shelby County and St Clair County to better serve residents wishing to attend. Keith Brown is the college's president.

In 2005, 7,326 students were enrolled in the system. An additional 3,600 students took non-credit classes during that year. 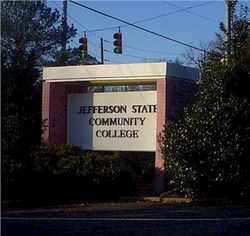 entrance to the Jefferson Campus
The Jefferson Campus is located in northeast Birmingham at 2601 Carson Road. This wooded, 200-acre campus is the original and largest campus of the Jeff State system. The campus consists of 12 separate buildings:

The Shelby Campus, also locally known as the Scrushy Campus, is located in Pelham at 4600 Valleydale Road. Opening in January 1993, this campus has an enrollment exceeding 2,000 students in serving southern Jefferson and Shelby counties. Classes are held in the General Studies Building, used to be known as "Richard M. Scrushy Hall" or the newer Health Science Building which is directly across from veterans park and off Spain Park High School's Jaguar drive.

The St Clair Center - Moody is located in Moody at 2603 Moody Parkway. In operation since fall 2003, all classes at this location are held in the third floor of the Covenant Commerce Center [1].

The St Clair Center - Pell City is located in Pell City at 500 College Drive. Opening on August 18, 2006, all classes are held in a single classroom building. For its initial semester, the center saw an initial enrollment of just over 200 students. [2]

The Pell City classroom building was designed by Jenkins Munroe Jenkins Architecture of Anniston with Hoar Construction serving as general contractor. Construction of the concrete, 3 story, 43,000 square foot structure began in April 2005 and was complete by summer 2006.